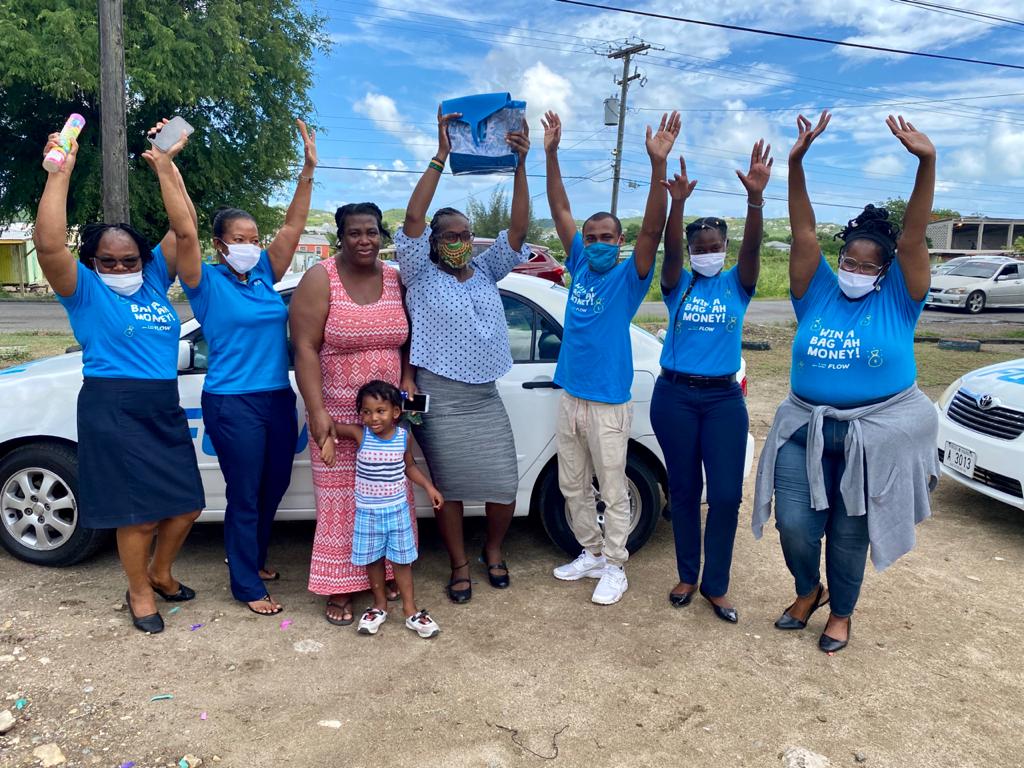 Leesha Marcellin is $10,000 richer thanks to Flow. The lucky young entrepreneur was surprised with the news at her home that she was the Grand Prize winner in Flow’s Bag ah Money promotion. She says, “The money could not have come at a better time!”

Leesha’s name was entered into the prize draw when she topped up her mobile phone online about a week ago. When asked about plans for this sudden windfall of cash, she tearfully replied, “I am going to fix up our home.” Leesha’s mother, who helped Flow pull off the surprise to her daughter, said that “Leesha also has plans to go back to school.”

Leesha’s mom said she told her daughter to take a day off from work to accompany her to the airport as part of the elaborate plan to surprise her. “I also asked her to put on something nice. You should see all the clothes inside on the bed from her trying to get the right outfit”. She continued, “when I looked outside and saw all the Flow vehicles pull up it was very emotional as I knew how much winning that prize would mean to her and I started to cry”.

Leesha stepped outside to be greeted by a squad of Flow representatives in blue. She admits to being a bit confused at first and wondered what was going on. Flow’s brand influencer DJ Quest introduced the team. He asked Leesha a few of questions including if she knew about the promotion that Flow was running. He delayed giving her the big news by first asking how she would react if she had won some of the smaller prizes including a phone, top up credit or a free ‘Always On’ data plan. He eventually gave her the good news, and she began to shed tears of joy.

Commercial Manager Denise Dixon remarked, “We are beyond delighted that at Flow we create such memorable moments for our customers. Moments that allow them to fulfill their dreams.  Going back to school and home Improvement are certainly moments we are proud to be a part of”.

Flow’s “Bag Ah Money” promotion ran for 8 weeks with 10 winners of $1,000 and 2 winners of $10,000 each. To be eligible to win the promotion required customers to simply top up $25 or more, activate an Always On prepaid plan or switch to Flow.

“We are the leading full-service communications and entertainment provider in Antigua and Barbuda. We commit to regularly reward our customers and consistently provide value for money “said Dixon.